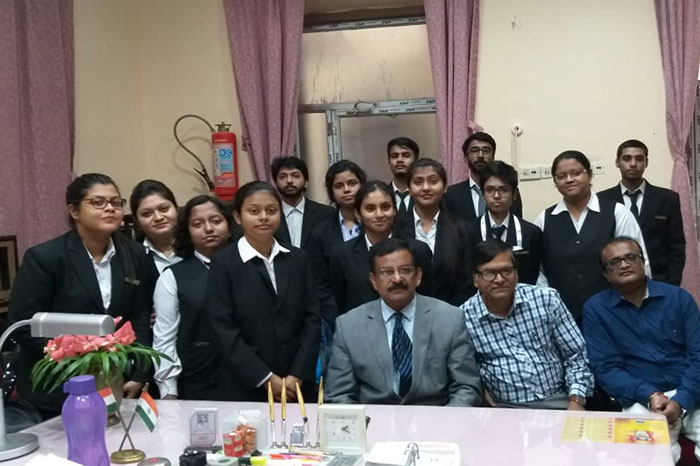 On 14th November 2018, the students of 5th Semester, B.A. LL.B (Hons.) and B.B.A. LL.B. (Hons.) , School of Law and Justice, Adamas University, along with three faculties of the School, Shri. Tapan Kr. Das (Retd. Judge), Ms. Anuleena Bhattacharjee and Dr. Rakesh Kr. Singh, had visited the Museum located in the premises of the District and Sessions Court, South 24 Parganas, Alipore, which assumes immense historical importance as the trials of many revolutionaries of our freedom struggle were held therein. The students had the opportunity to view the court room where the trial of Sri.Aurobindo and his associates were held in connection with the Alipore Bomb Case, which has been kept in its original position till date. The photographs of under trials kept in the accused dock, copy of the judgement, other records and exhibits related to the case as well as the portion of the historical argument advanced by Defense Counsel Barrister Chittaranjan Das, which was a source of inspiration to the freedom fighters and which instilled a new definition of patriotism materially different from rebellion in the aforesaid case were inspected by the students. Besides, case records of the trial of Khudiram Bose, Prafulla Chaki, Rash Behari Bose, and arrest warrant against Netaji Subhash Chandra Bose etc were examined by the students. This was followed by a meeting with the District and Sessions Judge, South 24 Parganas, Sri Rabindranath Samanta, who wished the students success in their future endeavours and a bright future in the field of law.